Leugey is a member of the Raptors squadron.

A nervous, yet apparently more attentive Raptor, Leugey is often the first of the group to notice when something bad is going to happen, but only to be inevitably ignored until it's too late. Being the scapegoat of the group, he tends to be blamed for any failure, regardless whether he was responsible or not. Unfortunately for him he is rather unintelligent. Examples of his brainlessness are when he dumped a crate full for Fire Crystals into a volcano's core when he was instructed put them in one at a time, when he had his brothers fly above the treeline on Terra Bogaton only to get shot down by their own anti-air defenses, and when he made a snowman and got beaten up by Repton.

Leugey's most useful moment was when he and Stork were in a chase for Gravitron crystal in "Life With Leugey". Leugey managed to almost grab it only to Stork swallow it. It resulted in the crystal being activated, and stuck Leugey and Stork together. In order to negate the effects of the Gravitron crystal field, the Storm Hawks were forced to take Leugey to on board the Condor, and made him an "Honorary Storm Hawk". However Leugey's stupidity is compensated with enormous strength as he was able to defeat a Sky Shark in moment.

Leugey once was "in charge" of Cyclonia until Master Cyclonis' return.

Leugey states that Repton is his brother. 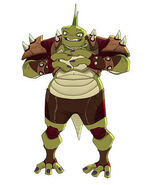