Harrier is the sky knight leader of the Rex Guardians, who defend Terra Rex and is the oldest squadron in existence[2]. He is traditional and takes the Sky Knight Code seriously. He is quite stuck up and extremely old fashioned - joining with Terra Rex, which is also old fashioned, quite well - and his attitude brings along hostility with members of the Storm Hawks. His age is unknown, but it is easy to assume he is in his late twenties or thirties. He's also seen in the battle in which Lightning Strike was defeated, and alongside Strike was one of the first Sky Knights to breach Cyclonia's defenses.

He initially confiscated a Phoenix Crystal from the Storm Hawks, and then engaged them in a contest for it. His challenge was to compete with Aerrow in a sky joust, but when his opponent discarded his weapon, Harrier engaged the Storm hawk's leader in a brief dual. He was able to hold his own, but was eventually defeated when Aerrow dodged one of his strikes, causing him to slice into his own skimmer.

Later, Harrier hands the crystal over to the Dark Ace, whom he apparently made a deal with. The Dark Ace then turns on Harrier, attacking him and the Terra. The Storm Hawks intervene and the Dark Ace uses the Phoenix Crystal, unknowingly summoning the bird that defends it. He is then forced to flee, finally abandoning the crystal to save himself. Finally, Harrier apologizes to the Storm Hawks for his actions and agrees to some training tips from Aerrow.

Harrier also appears in "Atmos Most Wanted". He and his squadron confront the Storm Hawks about their stolen sky ride, and then appear later on in the episode to help corner the Storm Hawks on Terra Atmosia. In this episode also, Harrier is catapulted - along with other members of the Rex Guardians - out of the Condor by Stork's invention. Harrier appears to command some respect amongst the other Sky Knight squadrons, as they follow his orders when dealing with the Storm Hawks.

Harrier wields a a single long blade powered by a yellow stryker crystal. An older design, but still very effective in a fight. Besides his weapon, Harrier is also considered a master of the combat style known as Sky Fu, a hand-to-hand technique that he is "letter perfect" at.

Harrier rides an Air Skimmer Classic. One of the first skimmer models ever made, with a single set of manually-triggered folding wings. While these antiques are slower and clunkier in tight situations, the classic's Tundras steel plating and solid frame allow it to withstand fairly heavy fire.

Harrier appeared to have a very close relationship with the original Storm Hawks, fighting directly alongside Lightning Strike during the Final Battle against Cyclonia. Since that day however, his opinion seems to have become more bitter. Harrier initially looks down on the newly reformed Storm Hawks, disregarding them as children and refusing to return the crystal, so Aerrow challenges him to a duel between their squadrons. However, after being defeated by the Dark Ace and having his life saved as the Storm Hawks subsequently repel the Dark Ace on their behalf, Harrier agrees to take some pointers from the Storm Hawks.

After winning the challenge in Episode 4, Harrier hands the Phoenix Crystal over to the Dark Ace in an attempt to placate Cyclonia. Obviously unfamiliar with the dishonorable tactics of villains, he is surprised when the Dark Ace attacks anyway. Harrier realizes that the rules of the code don't apply to the Cyclonians who will do anything to get what they want. Still convinced that his squadron is superior, Harrier insists that they'll fight the Dark Ace on their own, in order to show the Storm Hawks 'how real Sky Knights do battle'. Finn happily predicts that they'll be "smacked down so hard," which the Dark Ace proves correct by quickly taking down the entire squadron with relative ease, even going as far to sever Harrier's parachute in the process. He is also seen as one of the Sky Knights wiped out by the Dark Ace as he uses the Aurora Stone. 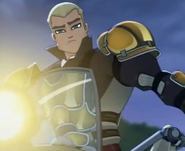 This article is a stub. You can help Storm Hawks Wiki by expanding it.

Русский
Community content is available under CC-BY-SA unless otherwise noted.