Carver was originally the leader of the Red Eagles, considered to be the greatest Sky Knight squadron after the Original Storm Hawks destruction 10 years prior. As such, he was seen as being both the greatest living Sky Knight and true hero, until his imprisonment by the Storm Hawks for stealing the Aurora Stone in the pilot episode.

Carver was famed throughout the Atmos for his heroic deeds and adventures, such as the time he slept covered in slugs to capture a group of poachers, or went without food and water during his rescue of Princess Hannah. Carver led his team into becoming recognised as the greatest Sky Knight squadron in the entire Atmos. He even had his own fan-club, with a newsletter that kept its thousands of members up to date on his deeds. Carver's squadron wore only the finest armour and clothing, living a life of celebrity as the heroes of Atmosia.

In the pilot episode, Carver and his squadron are seen arriving on Terra Atmosia, to a cheering crowd of admirers. One member of the crowd states that Carver and his men are "true Sky Knights", in reference to the newly reformed Storm Hawk's age and inexperience.

Carver and his squadron later arrive at the tower of the Aurora Stone, where his surprised squad mates are quickly betrayed and incapacitated by their (now former) leader. Carver then successfully steals the Aurora stone, but his escape is stopped by the arrival of the new Storm Hawks. Carver then claims to be more intelligent then the rest of the people of Atmos, because he can tell that the winds of favor are blowing in Cyclonis' direction. After a brief dual, in which he was able to initially overcome Aerrow, he is taken off guard and promptly defeated by the Storm Hawk's newly discovered move, the "Lightning Claw". Carver was then captured and imprisoned within Atmosia's High Security Stockade.[2][3]

In "Second Chances", Carver eventually convinces everyone that he stole the stone because he was under Cyclonis' Mind Control.[1] This granted him freedom and he then joined the Storm Hawks, much to the excitement of Finn, who saw him as being "the coolest, most famous Sky Knight ever". Carver initially played nice and got the Storm Hawks new uniforms and a large fan base with more exposure than ever. Carver quickly began to overshadow Aerrow, being a key part in the Storm Hawks rescuing a kitten, diverting a crashing airship and defeating giant monsters in the wastelands.

These heroics were only for show however, as Carver had been subtly trying to eliminate Aerrow through a series of traps during every mission. He eventually managed to convince the Storm Hawks that Aerrow was under Cyclonian Mind Control, causing Aerrow to be imprisoned. Carver then tried to murder Aerrow by letting Stork's poisonous spider loose in his cell. The spider however, turned out to be a tickle spider rather then a deadly one and Carver's scheme was uncovered. After once again duelling Aerrow, this time in a far more prolonged fight, Carver was once again defeated and placed back in prison.

Whilst once considered a good and noble man, rising to become the most renowned of Sky Knights, Carver is now vindictive and opportunistic. He will do anything for power, be it betray his Terra or kill an innocent boy. His first defeat at the hands of Aerrow led him to developing a grudge against him, to the point he tried to kill him several times. Whilst he initially allies himself with Cyclonia, he isn't a true believer in their cause, simply aiding them to reap his promised rewards. It is ultimately implied that his turn to evil was the product of excessive fame, power and fortune.

Carver rides an Air Skimmer III Ultra. It is the same design as the regular III model with significant upgrades. Highly maneuverable, it’s equipped with a special crystal fuel afterburner that gives the Ultra a short, powerful burst of incredible speed when deployed (as long as it doesn’t explode, which happens in about one out of 17.5 deployments, causing significant problems for the pilots)

Carver utilizes a single energy blade powered by a red Striker Crystal. The blade is capable of firing blasts of energy at Carver's foes, and can create an energy shockwave when plunged into the ground. Carver has also been shown to favour an Energy Staff against larger opponents, topped with a large, purple energy crystal. 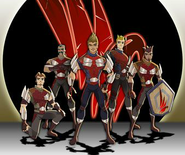 Aerrow and Carver prepare to dual.

This article is a stub. You can help Storm Hawks Wiki by expanding it.

Community content is available under CC-BY-SA unless otherwise noted.